Next Chapter
4.b Health 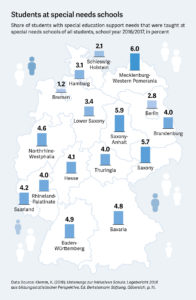 Article 23 on the UN Convention on the Rights of the Child describes the rights of children with disabilities to lead fulfilled lives of dignity, independence and active participation in the community. While children with disabilities can generally lead fulfilled lives in Germany, whether or not this happens is heavily dependent on where they live, their financial and family resources, and their access to education and information.

Inclusive education is a key access point to social participation. 7.1 percent of all school students across Germany receive special educational support. Of these, only 39 percent are schooled inclusively. With regards to the different types of schools, comprehensive schools (Gesamtschulen) and general secondary schools (Hauptschulen) have the highest inclusion percentages, with more than 5 percent of pupils receiving special education support. Inclusive schooling at secondary schools (Gymnasien) remains the exception, with a percentage of just 0.3 percent.

The federal education system also results in unequal educational opportunities due to differing school codes and framework conditions. In terms of the inclusion rate, states such as Bremen, Berlin and Schleswig-Holstein have been successful in having classes that combine pupils both with and without disabilities. On the other hand, the amount of children attending special-needs schools is on the rise in southern Germany. There are also differences in relation to content. For inclusion at schools to be successful, a series of requirements and framework conditions need to be met. For instance, there need to be special-needs teachers in all inclusion classes, smaller class sizes and educational inclusion concepts, among other things. And this is not always a given, even in states with high inclusion rates.

Transitioning from school to career

The transition from school to tertiary education is an important phase that has a major influence on the further participation of adolescents with a disability in community life. Among the class of 2014, five in ten students without a general school-leaving certificate were from special-needs schools. This puts them at a disadvantage on the tertiary training market. At the end of 2014, there was also a sharp decline in training courses in special careers for people with disabilities as defined by Sections 66 of the German Vocational Training Act (BBiG)/Section 42m of the German Trades and Crafts Code (HwO).

Despite the large number of vocational training options, there is a particular lack of inclusive courses, and courses aimed at inclusion in professional life, for adolescents unable to obtain a vocational training certificate. The existing options tend to be more segregated, and the overwhelming majority continue to be aimed at special target groups, due to the varying jurisdictions and thus structures.

For many years, there have been calls for child and youth support services to have sole jurisdiction for all young people. The jurisdictions are currently divided: While the social welfare system is responsible for integration benefits for children or adolescents with intellectual or physical disabilities, child and youth support services are responsible for children and adolescents with psychological disorders.

This complex legal situation raises interface problems, and impedes young people’s participation. The jurisdiction split results in inappropriate ‘jurisdictional diagnostics’, meaning aid and support are not geared around the child’s needs. Implementing an overall jurisdiction in child and youth support should not be reduced to a new performance element or a restructuring of legal entitlements. The entire infrastructure for child and youth support particularly needs to be further developed conceptually, and its services rendered inclusive, with all parties involved having the correct training and attitudes. Children with disabilities must not keep being denied access to benefits established in Volume VIII of the German Social Code.

Protection against the sexual abuse of girls with disabilities

Statistics show that girls and young women with disabilities are the target group most frequently affected by sexual abuse. Unlike child and youth-support services, disability-support facilities and services do not have nationwide regulations on protection mechanisms. Legal changes are urgently required here.

Inclusion as a key social process

Inclusion is a principle of human rights that enables people to participate in all areas of life. Implementation of the UN Convention on the Rights of the Child and the UN Convention on the Rights of Persons with Disabilities cannot be considered successful while lots of children with disabilities continue to be excluded from key areas of social interaction, such as education, recreation, culture and work. Inclusion must also be viewed as a process that needs to be extended and further developed beyond the schooling phase. It is a responsibility of society as a whole, and must shift from the periphery to the central focus of political debate. Inclusion does not just apply to education, but rather encompasses all aspects of a child’s life. As such, policymakers are also called on to take action in related areas, e.g. urban planning mobility or sport and culture.

Next Chapter
4.b Health
Menu