During the reporting period, the rules regarding family reunification have changed several times, especially for those people granted subsidiary protection. While the legal situation existing at the time of this report’s compilation is, in some cases, more liberal compared to the last reporting period, it remains concerning at both a legal and practical level. 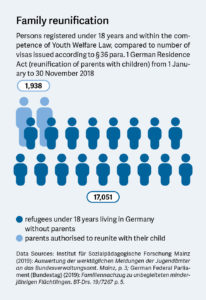 A strict quota of 1,000 persons eligible for reunification per month has been in place as per Section 36a in conjunction with Section 104 Paragraph 13 Clause 2 of the German Residence Act (AufenthG) since 1 August 2018. As such, children who had been left behind in another country cannot be reunified with their families, if the monthly quota has been exhausted. With regards to the implementation of the quota rule, the priority given to the best interests of the child on the humanitarian grounds established in Section 36a AufenthG remains unclear. The federal states already warned of these uncertainties, and asked for further clarification – which was not forthcoming – during the legislative process. There is still doubt regarding how humanitarian grounds relate to each other, which criteria are taken into account and the extent to which they are taken into account, and thus ultimately the order in which requests are registered in order to ensure transparent selection based on binding criteria. Further delays occur as a result of waiting times for appointments at German representations abroad and the length of the administrative process. Consequently, neither the priority for the best interests of the child (Article 3 of the UN Convention on the Rights of the Child) nor the statutory acceleration established in Article 10 of the UN Convention on the Rights of the Child can be duly taken into consideration.

Another concerning development is the fact that Sections 28 ff. AufenthG now officially also excludes sibling reunification with children already living in Germany. Only certain hardship cases as defined by Section 22 AufenthG are eligible to reunite with their siblings living in Germany. This restriction on reunification prevents the best interests of the child, as per Article 3 of the UN Convention on the Rights of the Child, from duly being given preference. While sibling separation was initially commonly avoided in administrative practice, is has been noted that, since at least the amendment in 2018, the act has become very restrictive, and that siblings are increasingly being separated from each other, as are children from their parents. These regulations has had unexpected effects on the integration process in that people who are worried about the life and limb of their children, siblings or parents find it difficult to settle into life in Germany.