In accordance with Article 26 and 27 of the UN Convention on the Rights of the Child, every child has a right to grow up in social security and with an appropriate standard of living. This is not the reality for an increasing number of children and adolescents in Germany. Despite economic growth and declining unemployment, child poverty has been on the rise for years. This has serious consequences for the rest of the children’s lives and fulfilment of a number of children’s rights, including education, health development, social participation or opportunities for involvement. 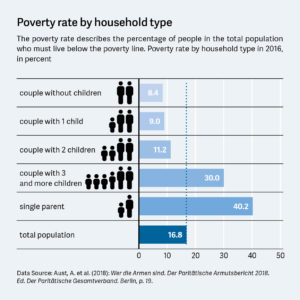 Around 3 million children and adolescents currently live off government benefits to survive, with more than 1.6 million doing so even though their parents are gainfully employed. They receive additional benefits under Volume II of the German Social Code, housing benefits or child allowance. In addition, there are many families who do not apply for benefits for shame of stigmatisation, due to cumbersome bureaucracy, or because they are not even aware of their social entitlements. The number of unreported cases of child poverty is thus high. The German federal government states that around 30 to 50 percent of those entitled to benefits under Volume II of the Social Code, and indeed 60 to 70 percent of those entitled to a child allowance, do not apply for benefits. The number of those not claiming the Education and Participation Package (Bildungs- und Teilhabepaket) is sometimes even higher.

But even with government benefits, the minimum subsistence level, including physical needs for clothing, food and shelter, as well as education and social participation, is not guaranteed for all children.

The method for calculating minimum subsistence has for many years been met with criticism. Experts believe social benefits are too low – in view of the inadequate statistical basis for children’s needs, the additional inclusion of unreported poor households, and the arbitrary removal of certain budget expenditure items. The statutory rates for children are also calculated based on an already poor comparison group. The minimum subsistence level under social law is thus extremely tight. The spin-off into the Education and Participation Package, which fewer people claim, means education and participation are not guaranteed.

The minimum subsistence level for children is massively undercut if the already very tight social benefits are further reduced due to sanctions. Much of these reductions affect children and adolescents. In some cases, entire benefits are cut, and this can have far-reaching consequences for families in the form of power blackouts or the threat of homelessness. As such, the German federal government’s Children’s Commission announced back in 2017 its intention to cut sanctions in order to reduce child poverty. The German Federal Constitutional Court is currently assessing the constitutionality of sanctions.

Although a lot of expertise exists on the topic of poverty, and, by virtue of the 5th Poverty and Wealth Report from 2017 and the overall evaluation of marriage and family-based benefits from 2013, the German federal government has extensive knowledge of the extent of child poverty and the need for initial target-group-specific reforms to reduce it, no political priority is ever given to combating child poverty. And children and families are feeling this: 90 percent of children and adolescents, and 73 percent of adults, believe policymakers do not focus enough on the issue of child poverty.

Apart from very few exceptions, the German federal government’s actions in recent years have been limited to constitutionally required adjustments: It increased child tax deductions, and did the same for child benefit, but failed to close the gap between this tax relief and the child benefit amount. As the child benefit is offset against other benefits such as basic benefits and child support for low-income earners, poor families do not benefit from an increase. The German federal government similarly adjusted the statutory rates for children on a rotational basis, but did not make any changes to the much-criticised calculation method. The Education and Participation Package was only adjusted in 2019 as part of the so-called ‘Strong Families Act’ (‘Starke-Familien-Gesetz’), thereby increasing the contribution paid out for school supplies (among other things) and abolishing own contributions for midday meals.

This same act has also increased the child support for low-income families from 170 to 185 euros, and will in future peg this to the actual minimum subsistence level. The pay-out, however, will regrettably still not be automatic, which is why an extremely small number of people are once again expected to claim it. The 2017 broadening of the advance on maintenance payments (Unterhaltsvorschuss) was an important step for solo parents and their children, who are a group particularly at risk of poverty; the broadening saw the tight age limit and maximum receipt period abolished.

Given the rising number of children in poverty, however, the measures taken to date do not suffice to combat this. There needs to be a well coordinated, interdisciplinary, nationwide strategy tackling child poverty, which includes a reform of monetary benefits, preventive approaches, and reinforced social infrastructure – from child day-care centres to schools to recreation.

Education is an effective way of combating poverty. If the right to education is denied, the risk of poverty, as well as health risks, increases. The pandemic and many of its associated consequences – job losses, reduced working hours, closures of day-care centres, schools and care facilities, the multiple switches to digital remote learning – hit children and adolescents particularly hard. The pandemic amplifies existing problems, and this has lasting impacts, especially for poor families.

When day-care centres and schools closed, children and adolescents lost many of their social contacts, and financial distress became more acute. The free lunch at day-care centres and schools, to which approx. 3 million children and adolescents are entitled, disappeared without a substitute. At the same time, some food prices rose, and food banks for those in need were forced to shut their doors. It is virtually impossible to make up for the lost free lunches through the existing social benefits, because the standard rate for children and adolescents is extremely meagre: The budget for food and drink, for example, is around four euros a day for a ten-year-old. The free lunch granted by the Education and Participation Package at day-care centres and schools was previously in addition to this. The child bonus of 300 euros per child made as a one-off payment to all families is not an effective way of sustainably combating child poverty.

While the German federal government’s Education and Participation Package has also enabled day-care-centre or school meals to be home-delivered (wherever the municipalities were able to organise this), this could only make up for the loss in certain cases. No further requested measures were implemented, e.g. temporary increases of social benefits to directly and non-bureaucratically compensate for the price increases and the loss of the free lunch.

Cramped living conditions mean there is often nowhere quiet to study. The experiences of self-efficacy necessary for successful learning evaporated almost completely as a result of the lack of social interaction, causing disadvantaged students to fall even further behind.

Many families do not have any or enough of the necessary personal digital learning materials, such as laptops and computers. Barely fifteen per cent of twelve-year-olds and twenty-seven per cent of fourteen-year-olds from households receiving social welfare benefits have their own computer that they can also use for schoolwork. The federal and state governments have launched a 550-million-euro schools emergency programme intended to cover purchases of mobile end devices for students who do not have their own. The funds are spread based on the ‘Königstein Key‘, which is geared around tax revenue and population. This choice of distribution key does not enable adequate funding to actually go where it is most needed. Device purchases are also slow in many places, even though the new school year is in full swing at the time of writing and face-to-face learning cannot be guaranteed everywhere. Loaning devices to particularly poor students can in turn also have a stigmatising effect.