Previous Chapter
1.b Non-discrimination
Next Chapter
1.d Ecological rights of the child

Participation in Social and Political Processes

The right to participation is a right encompassing all children’s rights, and is established in Article 12 of the UN Convention on the Rights of the Child. Children and adolescents are entitled to participate in all issues affecting them. Greater involvement of young people in the social and political decision-making processes is a declared objective of policymakers, and a key component of political education. 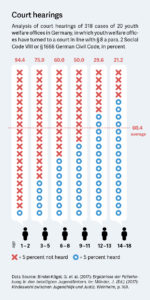 The National Action Plan ‘for a child-friendly Germany 2005-2010’ was enacted by the German Federal Cabinet on 16 February 2005, and established the participation of children and adolescents as a central field of action. Unfortunately, the NAP was discontinued, even though many of its targets, including the effective participation of children and adolescents, were not met.

A comprehensive, effective participation policy needs to share decision-making power and transparently provide information on the framework conditions. Because real involvement only begins when young people are given the right to be heard, to take the initiative, or to help shape policy by delegating votes. But co-determination requires influencing decisions and effectively being able to share in the decision-making process.

There is no general obligation in Germany to establish easily accessible complaints procedures for children and adolescents. A legal obligation to establish complaints procedures only exists in relation to child and youth support services under Section 45 Paragraph 2 of Volume VIII of the German Social Code if institutions are required to obtain an operating permit. This obligation does not apply for institutions such as schools, sports clubs, cultural establishments or refugee facilities at a municipal, state or federal level.

Participation in Administrative and Court Proceedings

As outlined in the State Report, the guardians ad litem have been legally established as the party representing children’s interests in Section 158 of the German Act on the Procedure in Family Matters and Matters of Non-contentious Jurisdiction (FamFG). In general, there are major local differences regarding court resources, the conduct of court hearings , and the approach to appointing guardians ad litem.

Section 159 FamFG contains legal regulations on child participation for family-law procedures. In practice, however, hearings of children are not always conducted. A study of 318 cases found that, in the context of proceedings regarding the best interests of the child, 60.4 percent of children and adolescents are not given a hearing. This figure was 21.2 percent for 14 to 18-year-olds.

A survey of 48 children and adolescents, conducted by the German Institute for Human Rights (DIMR) in 2014 on behalf of the European Union Agency for Fundamental Rights, found that, during court proceedings, children are often very poorly informed, intimidated or do not feel they are being taken seriously by the adults.

There are some 11,000 municipalities in Germany. Around 5 percent of these have permanent child and youth committees. These are often structurally safeguarded by statutes, and have the right to be consulted or to contribute to decisions. In many cases, low-threshold, project-oriented forms of participation are also relied on at a municipal level, though these tend to have more of a selective focus. About 1 to 2 percent of municipalities have full-time child support officers or child service centres which represent children’s interests in dealings with municipal administrations. This is far from a comprehensive support network. Experience has shown that, coupled with practical implementation measures at a state level, establishing a provision for mandatory child participation in municipal codes results in a positive increase in participation activities. One example of this can be seen in the state of Schleswig-Holstein, which incorporated a provision on mandatory child and youth participation in its municipal code in 2003.

The right to participation, as established in Art. 12 UN CRC, does not cease to exist during and after crises; children should instead be encouraged and enabled to play an active role in tackling the crisis. Child wellbeing can only be properly investigated if the child’s right to be heard and have their opinion taken into account is respected. As the measures have far-reaching impacts on the children’s lives, and intensify existing inequalities, shortcomings in minors’ participation in democratic decision-making processes have deteriorated further since the start of the pandemic.

The lack of involvement of young people in the decision to open and close schools, and in structuring lessons and school operations, including hygiene measures and remote learning, was particularly noteworthy. Student representatives, both from the individual schools and at a state and federal level, were not listened to enough. The German federal government’s education summits did not involve directly affected children or specialists from various formal and informal educational establishments to discuss or consider the children’s interests and needs. Affected children were similarly not involved in establishing measures for extracurricular aspects, such as closing playgrounds and subsequently imposing conditions on their use.

Children engaged in representative forums at a municipal and state level spoke of difficulties exchanging ideas with others during the coronavirus period due to technical problems and a lack of support, and that the contact restrictions had delayed many processes because digital structures first had to be set up, and some of the adults in charge were already overwhelmed with work. In addition, the vast majority of people in Germany also believe that children’s interests were not adequately taken into account, if at all, in the measures implemented during the coronavirus pandemic.

Previous Chapter
1.b Non-discrimination
Next Chapter
1.d Ecological rights of the child
Menu